Have you ever seen a lava lamp? Although it might seem complicated, the principle behind it is beautifully simple. Like everything else in science 😉

Here, we will explain in detail how to create a lava lamp using nothing but common things you can find in almost every kitchen.

This experiment can be done in a few simple steps:

1. Fill the glass with the oil. Depending on the dimensions of your glass, make sure that the oil takes up around 2/3 of the volume. If it makes easier, you can take 200ml yogurt cup and fill it up to the top. Thi is the volume you’ll need.

2. Then add water. Again, if you have a glass with different dimensions, just make sure that there is enough water for a tablet do dissolve. Similarly to the oil, you can fill half of the yogurt cup with water. Don’t worry if there are bubbles when you add the water.

When adding water to the oil, you can see they don’t mix. The main reason is a difference in the polarity of their molecules. Oil molecules have long nonpolar hydrocarbon chains. In contrast, a water molecule is polar due to its bent molecular shape, which causes an unequal share of electrons – one end of the molecule has more electrons than the other, making one side more negative compared to the other. Because of these differences, molecules of water and oil cannot establish interactions and mix.

Furthermore, you may notice how oil always stays on top of the water. This is due to different densities. Oil, in this case, has a lower density than water.

4. Finally, drop one tablet in the glass.

The tablet mainly is made out of two components: the citric acid and the bicarbonate base. When the tablet is in a solid-state, those two cannot react as the molecules don’t move. Once in the water, molecules have the freedom to move and then, the reaction happens: the acid donates hydrogen ions to the base which is an acceptor of hydrogen ions. As a byproduct, gas is released. The speed of the gas release indicates how fast the reaction is proceeding.

When you drop the tablet in, notice how it doesn’t react with oil, but goes all the way down to the water.

Once it reaches the water, it starts producing bubbles, which are essentially released carbon dioxide gas. The density of those bubbles is lower than water and oil, so they can go to the top of the glass. However, while traveling, they trap some of the water molecules. Once the bubbles reach the top, they mix with air, leaving water droplets in the oil. And as we said before, due to different properties of water and oil, water sinks back to the bottom, creating a lava lamp effect.

Have you tried making your own DIY lamp? Let us know how it goes and share with us your own observations, your photos or videos.

Fancy a challenge? There are plenty of conditions you can change in this experiment. For example, try making a lava lamp with different water temperatures, or try to reverse the order in which you add the ingredients. Let us know what you found out!

Did you like our first DIY? Would you like to see more of it or you have your own suggestion for it? Tell us all about it in the comments. 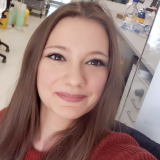